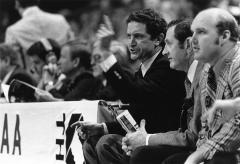 Rick died in 2012, but the Majerus Family Foundation he created carried on. The foundation has made a $1 million gift to create the Rick Majerus Endowed Scholarship. It honors the late Marquette alumnus and coaching legend.

The scholarship will provide tuition support to first-generation students in Marquette’s Helen Way Klingler College of Arts and Sciences who demonstrate financial need. It is the largest scholarship gift in the college’s history.

“Rick founded the Majerus Family Foundation in honor of our parents, and the values by which they lived their lives and passed on to their children,” said Jodi Majerus, Rick’s sister. “Our parents highly valued education and were proud that each of their children graduated from college – the family’s first generation to do so.

“Rick felt strongly about making higher education affordable and accessible to all,” she added. “And through a scholarship in Rick’s name, at his alma mater, we are honoring his deepest beliefs in the importance of helping others reach their highest potential.”

Majerus was among the first members of his family to attend college. He graduated with a history degree in 1970. He spent the next 15 years as an assistant and head coach at Marquette, earning his master’s degree in education from Marquette in 1979.

During his time at Marquette, Majerus embraced the Jesuit ideal of developing and caring for the whole person. The Majerus family’s gift will help a new generation of students have similar formative experiences.

“On behalf of the many students and families who will benefit greatly from this gift for years to come, the Marquette community offers the most heartfelt of thanks to the Majerus family,” Marquette University President Michael R. Lovell said.