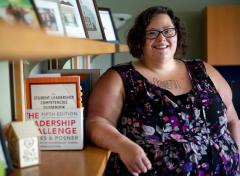 Rose Wasielewski recognized a need when she found herself in a conversation about stigmas and issues that affect some Lawrence University employees who feel defined by or live within the confines of low-income backgrounds.

In November, Wasielewski, an associate dean of students and dean of the sophomore class, helped launch LIFT UP, the newest of six employee resource groups on the Lawrence campus. It aims to provide support and resources for faculty and staff who come from low-income backgrounds or were first-generation college students.

Less than a year old, the group, chaired by Wasielewski, herself the first in her family to graduate from college, is getting noticed.

LIFT UP, an acronym for Low-Income, First Generation Talent Unpacking Privilege, is one of 38 recipients of INSIGHT Into Diversity magazine’s 2020 Inspiring Affinity Group Awards.

“I think LIFT UP is being so well-received because it touches on some marginalities and intersecting identities that aren’t as apparent on the surface but can still deeply impact the person with those identities,” Wasielewski said. “You cannot necessarily know someone was a first-generation student just by looking at them.

“I think many of us are hungry to take up the conversation about class and socioeconomic status and access so that we can work to dismantle some of the systems that don’t support, or even outright harm, some of our current students who hold these identities.”

In its report on the newly launched awards, the magazine called employee resource groups (ERGs) an important part of encouraging and facilitating diversity and inclusion in the workplaces of higher education. They can have a huge impact not only on recruiting diverse faculty and staff but also on retaining those employees long-term.

“There is a lot of conversation among members about wanting to use this group to make a lasting, tangible difference, not only for ourselves as employees but more so for our students,” Wasielewski said.