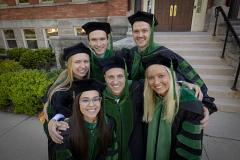 The 2022 Commencement Ceremony at the Medical College of Wisconsin Green Bay (MCW-Green Bay) campus was a celebration filled with happiness for achieving a long-desired goal and excited anticipation about the future. This year’s event was especially noteworthy. This class, MCW-Green Bay’s fifth, included its 100th graduating physician.

The ceremony also marked the 10th anniversary of MCW unveiling its vision for new regional campuses in central Wisconsin and Green Bay. This historic milestone represented the first new medical school campuses to open in Wisconsin in more than 100 years.

Matthew Wheeler, MD ’18, GME ’21, a member of MCW-Green Bay’s inaugural graduating class, returned to his alma mater to deliver the alumni commencement speech. He noted that MCW-Green Bay alumni were about to be spread across 15 states and 12 specialties. “Who would have thought,” he asked, “from the seed of an idea that such a widespread reach would be possible?”

That seed was planted in response to a looming crisis. A 2011 Wisconsin Hospital Association report estimated a shortfall of 2,000 doctors in the state by 2030 if 100 physician vacancies weren’t filled each year. This deficit would especially limit access to health care services in rural communities where the population tends to be older, and communities have fewer health care providers. MCW proactively addressed the dilemma in 2012, announcing the establishment of its regional campus in Green Bay.

The area had the necessary resources, and according to Mat- thew Hunsaker, MD, founding dean of MCW-Green Bay, the area was home to a core group of local public and private sector partners that provided “ideas, enthusiasm, commitment, and most importantly, a ‘can-do’ attitude.”