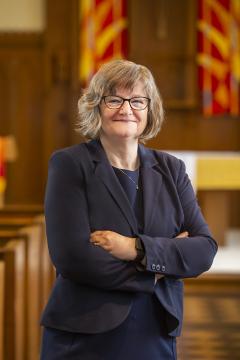 A native of Switzerland, Cherney speaks four languages and is a world traveler who has spent time in 32 countries on five continents and has visited 48 U.S. states. Cherney is familiar with the transformative power of a Mount Mary education. Her husband Mike and many of their nieces and nephews have been educated by the School Sisters of Notre Dame, the university’s sponsoring organization. Her sister-in-law and one of her nieces graduated from Mount Mary. Her husband grew up only one block from campus.

One of Cherney’s first major initiatives is overseeing the launch of Mount Mary’s new undergraduate major in User Experience Design (UX). One of the fastest growing fields, UX is the interaction between humans and technology.

A UX Designer investigates the human experience with technology and strives to design systems that are functional, accessible, and enjoyable for all users.

Demand for UX designers is booming. However, the representation of women in technology fields continues to lag. Women comprise just 25 percent of technology occupations. Of that, only nine percent are women of color.

Mount Mary University is in a unique position to help change those statistics. Mount Mary’s commitment to educating women from a diverse population puts the university at the forefront of this booming field. Plus, job prospects for graduates are unrivaled. UX designers are sought after and heavily recruited by major companies. Starting salaries in the Milwaukee area can average nearly $100,000 per year.

Mount Mary University continues to innovate and break new ground. With dynamic new leadership and pioneering new programs, Mount Mary is making a mark as a leader in higher education in Southeastern Wisconsin.