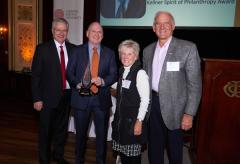 “Dan Bader is a visionary who is astute at identifying key local, national, and global issues and developing solutions that have improved the quality of life of people worldwide, including here at Cardinal Stritch University,” said Cardinal Stritch President Dr. Dan Scholz. “For more than two decades Dan Bader and Bader Philanthropies have provided the opportunity for our students to pursue their dreams.”

Bader Philanthropies has funded programs that help Cardinal Stritch students develop as leaders and appreciate the importance of changing their local communities by giving back through service. Through his support, Dan Bader has helped the entire Cardinal Stritch family live out its mission to transform lives and communities, centered around the Franciscan values of making peace, showing compassion, creating a caring community, and reverencing all of creation.

One of the key Cardinal Stritch initiatives funded in 1992 was the creation of the Leadership Center for the Advancement of Learning and Service, which pre- pared and sustained leaders who were catalysts for positive transformation of individuals, organizations, and communities.

Since its founding in 1992, Bader Philanthropies (formerly the Helen Bader Foundation) has committed more than $426 million in grants and more than $22 million in program-related investments that have transformed lives all over the world.

The Kellner Spirit of Philanthropy Award is named for Cardinal Stritch benefactors Dr. Mary and Ted Kellner. The award recognizes community leaders who have demonstrated significant philanthropic support of personal significance to Cardinal Stritch University and the metropolitan Milwaukee community.