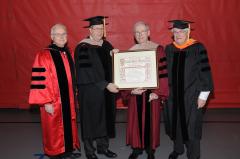 Dr. Wegenke received an honorary doctorate at the Milwaukee School of Engineering (MSOE)’s winter commencement. The following are excerpts from his remarks.

First, a lesson I learned from my Dad: my father never had the opportunity to attend college. He told me that he decided that he wanted to be a machinist when, as a child, he saw a drill press in operation—with shiny metal spiraling upward, and he said, “it was the most beautiful thing I had ever seen, and I knew I wanted to do something like that.” So, the first lesson is: seek beauty in whatever you do.

The second lesson is to take risks, to break out of the tried-and-true, “…to go where no one has gone before.” I suppose I also learned risk-taking from my Dad who was a problem solver and an inventor. Richard Florida wrote that the future belongs to the creative class, and, by definition, creativity means “the new.” You have been prepared to take calculated—not foolish—risks. Embrace the thrill.

The third lesson I learned from someone I never met, a dean in the University of Illinois system. He was quoted as saying of the 9/11 terrorists, “they were just as educated as anyone else.” Wrong! Education transmits knowledge, but true education is about wisdom. Neither we nor this world are just random, self-seeking flux. True wisdom includes meaning and morality.

The fourth lesson I learned from my son, Erich, a college junior. And that lesson is to take joy in everything in life. Life is what it is, but it can be what you make of it. Make it joyful!

The fifth lesson came from my wife, Karen. As the Apostle Paul teaches, “… Now these three remain—faith, hope, and love—but the greatest of these is love.”  I began by urging you to seek beauty. I’m not sure if you can seek love, but I pray you may find it as I have and that, if you are given the gift of love, you treasure it above all else.

The next lesson is: seize the opportunity to be part of a great cause. You have undoubtedly learned that your alma mater—is such a great cause. Private, nonprofit colleges and universities have neither taxpayer support nor compulsory attendance, but they were founded, and continue today, because of the creativity, risk-taking, voluntary support—and, yes, love—of the Board, the faculty, the alumni/ae, and the donors. All of this is done for YOU in the great tradition of American voluntarism…because of and for YOU.

The final lesson is from my mother. She always taught me to say “thank you,” not because she needed to hear it, but because she wanted me to be the kind of person who would say it. So, I thank you for this recognition and thank you for the privilege of being part of this great cause.