President Viets to retire from MSOE 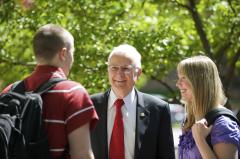 Dr. Hermann Viets will retire from the presidency of the Milwaukee School of Engineering on June 30, 2015. He is only the fourth president in MSOE’s 112-year history and has guided the university for 24 years. During that time the university’s campus footprint has grown dramatically and expanded degree programs fueled growing enrollment.

Viets’ vision for MSOE was to remain at the forefront of professional education with an emphasis on both theory and applied technology coupled with intense laboratory experience and career practice. He has worked to broaden the academic scope of the university while maintaining its application-oriented philosophy and, at the same time, supporting those initiatives that promote a well-rounded college experience.

“MSOE’s national academic reputation has grown under the steadfast leadership of Hermann Viets,” said Scott Moon, chairman of the MSOE Board of Regents. “Throughout Dr. Viets’ tenure, the economy has seen ups and downs, yet the demand for MSOE graduates hasn’t wavered. Employers know that MSOE graduates have an immediate and significant impact on their workplace.”

During Viets’ presidency, the university implemented study-abroad programs, a number of bachelor’s degrees such as actuarial science, biomolecular engineering, construction management and software engineering, and master’s degrees including perfusion and an MBA, among others. MSOE became the National Affiliate University for Project Lead The Way (PLTW) programs in the state of Wisconsin. The Rader School of Business, MSOE School of Nursing, Pieper Family Endowed Chair for Servant-Leadership and Uihlein/Spitzer Chair of Entrepreneurship were established during Dr. Viets’ tenure.

The university campus increased to 20 acres with the addition of Krueger Hall, Rosenberg Hall, Humphrey House and the German-English Academy. The Grohmann Museum houses the Man at Work art collection. The Kern Center athletic facility, and Viets Field, a soccer/lacrosse field built atop a parking garage, focus on student wellness. The Grohmann Tower student apartment building is the newest addition to campus.