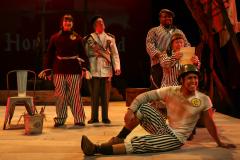 In an unprecedented partnership, Cardinal Stritch University’s Theater program, the Nathan and Esther Pelz Holocaust Education Resource Center (HERC), and the Harry & Rose Samson Family Jewish Community Center presented the Milwaukee premiere of The Last Cyclist in April. The play was performed at the Nancy Kendall Theater in the Joan Steele Stein Center for Communication Studies/Fine Arts on the Stritch campus.

Reconstructed and reimagined by playwright Naomi Patz, The Last Cyclist is based on a 1944 cabaret written by Karel Svenk in the Terezìn Concentration Camp, located in the Czech Republic. Audience members were invited inside the makeshift rehearsal space to bear witness to a show that was never performed due to its not-so-subtle political and emotional commentary.

For the Milwaukee performances, Stritch students worked alongside professional actors and theater artists for a unique and powerful presentation.

“The Last Cyclist is both a unique and important artistic experience,” said director Mark Boergers, who is chair of Stritch’s Theater program. “It gave us the opportunity to go further than depicting the horrors of a time like the Holocaust, but also represent the creativity and resilient spirit that existed. In the extreme degradation of the Terezìn camp, artists devised a comedic, yet scathing, political satire that epitomizes art’s role in resistance. This will have an impact on our students as actors and, just as important, as people.”

The opening night gala featured a talkback with Patz and Boergers.

The innovative collaboration led to a unique preparation for the cast, crew, and production team. Milwaukee resident Howard Melton shared a first-hand account of surviving the Holocaust and his commitment to spreading hope. Dr. Dan Haumschild, the HERC Holocaust Education Fellow, shared his expertise as the cast researched their respective roles in the play.