Pink explosion: armed with a flashlight and a sense of wonder, researchers discover hot-pink squirrels 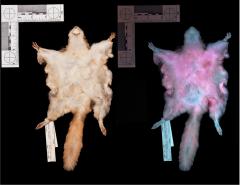 In May 2017, Dr. Jonathan Martin, professor of forestry at Northland College, read a paper by a researcher who had discovered the first frogs to fluoresce under ultraviolet light.

Martin is an amateur tree climber who has been working on a white pine canopy project for years with a colleague, Dr. Erik Olson, assistant professor of natural resources. They are learning about the critters that live at the top of the trees like the grey tree frog, which can have bright yellow on its underside.

Martin wondered if this yellow also might fluoresce. It did not. But his search for other fluorescing organisms became an almost nightly activity.

Then one night, he heard the tell-tale chirp of flying squirrels at his birdfeeder. He pointed his flashlight upward and noted a glimmer of pink coming from the underside of a flying squirrel—a nocturnal mammal that glides from tree to tree using its membranes or patagia that stretch between the forelimbs and hind limbs.

Martin assembled a team colleagues and asked Northland student, Allie Kohler ’18, now a graduate student in wildlife and fisheries at Texas A&M, to take the lead.

The four-person team recently published their findings the Journal of Mammalogy and have received overwhelming media attention.

First came an article in Nature, one of the top scientific magazines in the world. And then came the New York Times, National Geographic, Newsweek, Smithsonian, and other – seventy-plus and counting – publications.

There are two working hypotheses to explain the pink. The squirrel uses it to communicate or as a way to avoid predators.

Regardless of whether it has a role in animal fitness or if it’s a relic of some evolutionary twist and turn, Olson believes there is a bigger lesson to be learned from the pink squirrels. “These kinds of discoveries are reason to pause in wonder at the world around us.”