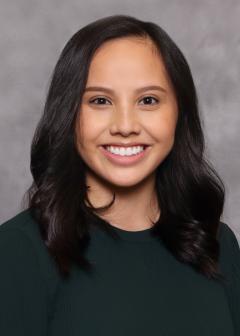 Kerchia “Asia” Lee is a first-generation college student. She is a Hmong American and Wisconsin native, and the first in her family to pursue a career in healthcare. She’s also an accomplished pharmacy student completing her final year in the Doctor of Pharmacy (PharmD) program at the Medical College of Wisconsin (MCW).

Now she has been honored as the inaugural recipient of the Mary Jane Shanks Trailblazer Award.

The award was established to be given to a MCW female, non-binary, or genderqueer student juggling multiple responsibilities in addition to their education. Mary Jane Shanks was a talented and respected teacher in Rockford, Illinois, and a single mother with three children to care for during her education. Mary’s family established the memorial scholarship to recognize the strengths of non-traditional students who thrive despite barriers to success.

“Like the namesake of this award, Asia is a talented and hardworking woman, mother, and leader,” said MCW assistant professor Brianne K. Bakken in her nomination of Asia. “As her faculty mentor I have been so impressed with Asia’s fortitude and continued work ethic while balancing her leadership responsibilities, research, and clerkship rotations, also while navigating being a new mom. Asia has so much potential and there is no doubt in my mind that she will make an outstanding pediatric pharmacist.”

Asia has excelled in the classroom, served as a leader of the Student Society of Health-System Pharmacists, and conducted research exploring health disparities and inequities in the Hmong population. In June 2021, during final exam week for her last session of didactic courses, she gave birth to her first child.

Asia was selected for one of only two spots in the Longitudinal Advanced Practice Experience (LAPPE) Program at Children’s Wisconsin. After finishing the LAPPE Program and graduating with her PharmD, her professional goals include pursuing a residency in a children’s hospital.