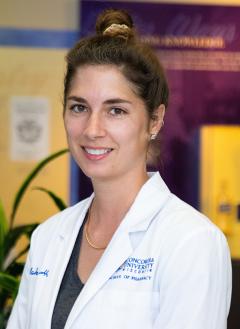 It’s hard to grow up in Waupun and not be reminded of the criminal justice system. The city is home to three prisons, including the state’s oldest penitentiary. About one-fourth of Waupun’s 11,300-person population is incarcerated.

Although Makayla Hopp, PharmD, a 2018 graduate of Concordia University Wisconsin’s (CUW) School of Pharmacy, never had any direct experience with correctional institutions growing up, the Waupun native was acutely aware of their presence in her home- town.

So, when it came time to rank her rotation preferences while at CUW, she naturally paired with the Wisconsin Department of Corrections (DOC).

Hopp stayed on with DOC after graduation and quickly rose to a leadership position.

She now serves as assistant pharma- cy director and oversees a team of 18 pharmacists who help fill prescriptions for the entirety of the state’s prison population. Altogether, Hopp’s team fills about 2,500 prescriptions a day.

“Our goal is patient care,” said Hopp. “Ultimately, we want to reduce recidivism. We want to provide the best possible care for our patients to set them up for success.” That attention to exemplary care was modeled to her at CUW. “At Concordia, the professors know you and care about you,” Hopp said. “They’re really invested in your education.”

Concordia also sets itself apart from other pharmacy schools by its commitment to collaborative healthcare. In 2021, the Accreditation Council for

Pharmacy Education (ACPE) extended CUW School of Pharmacy’s accreditation for the maximum eight-year term and named it one of only five “Noteworthy Examples” of exceptional achievement nationwide for its attention to interprofessional education.

“Interprofessional practices have been shown to improve patient care, lower costs, and reduce medical errors,” said Erik Jorvig, PhD, dean of pharmacy. “It’s significant that Concordia has been identified as teaching this high level of patient care with excellence.”