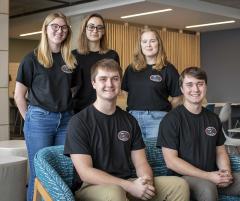 A team of five Carthage College students won the 2020 Lemelson-MIT Student Prize, which honors top collegiate inventors throughout the country.

The team consisted of graduating seniors Celestine Ananda and Nick Bartel, juniors Taylor Peterson and Cassi Bossong, and sophomore Bennett Bartel. Judges selected their project, a method of fuel gauging that could make air travel safer, as the best technology-based invention in the transportation category.

The budding inventors became the first team from a small school (under 10,000 enrollment) to win the prestigious competition since organizers formed undergraduate divisions in 2014. The award, announced in April, comes with a $10,000 prize.

All five students are members of the Carthage Microgravity Team, which since 2011 has partnered with NASA to refine the Modal Propellant Gauging (MPG) technology for potential use in future space missions. Separately, the inventors spent several months adapting MPG for use in planes and other types of aircraft.

“We competed nationally with schools such as MIT, Johns Hopkins, and so on, but we beat the odds,” said Cassi. “I am excited to see what the future holds for both the MPG technology and the team.”

With its demonstrated accuracy, the technology could help to clear a long-standing obstacle in the aeronautical industry. Unreliable fuel gauges are a leading factor in small plane crashes and cost the commercial satellite industry more than $1 billion annually.

Looking to commercialize the technology, the Carthage inventors are negotiating patent licensing and hope to modify MPG for commercial use. The team’s work has drawn interest from market leaders and pilots alike.

“I’m proud of them, because they did this entirely on their own,” said Professor Kevin Crosby, who runs the Carthage space sciences program. “I’ve watched this competition for years, and the teams that win are spectacular.”