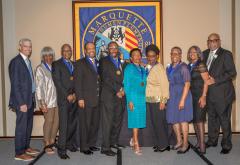 In his 1967 “Interracial Apostolate,” Rev. Pedro Arrupe, S.J., former Superior General of the Society of Jesus, wrote: “The racial crisis involves, before all else, a direct challenge to our sincerity in professing a Christian concept of [humankind].”

Jesuit colleges and universities across the country would heed this call. For Marquette, students became vocal about racial inequalities following the “long, hot summer of 1967,” when more than 160 race riots erupted across the country. In March 1968, students presented a 12-point petition calling for more scholarships for African American students, more classes on African American culture, and additional outreach programs in the neighborhoods surrounding Marquette.

Soon after, Dr. Martin Luther King, Jr. was assassinated and the student’s demands took on an added urgency.

“The people of color on campus felt that Marquette wasn’t doing enough to get people with scholarships in and diversify the campus,” said George Thompson, a former NBA and Marquette men’s basketball player. He and several other Marquette basketball players threatened to quit school if the student protestors’ demands for racial equality were not met.

Marquette formed a Special Committee on Scholarship Programs and Courses in Black and Minority Cultures to address student concerns. Based on their recommendations, the university founded an initiative to serve underrepresented students, which evolved into Marquette’s Educational Opportunity Program (EOP).

Marquette’s EOP started with just 40 students and one staff member and flourished into what became the model program for other Educational Opportunity Programs and the United States Department of Education’s federally funded TRiO programs. EOP provides tutoring, academic advising, and graduate school preparation to assist underrepresented and first-generation students in their transition into Marquette and ultimately graduation.

“Marquette’s history is rooted in increasing access to higher education,” said Dr. Michael R. Lovell, president of Marquette. “The development of EOP in 1969 helped ensure educational access for students who were — and still are — underrepresented at Marquette and in higher education overall.”

The 50th anniversary of EOP is being celebrated at Marquette during the 2019-20 academic year with a series of educational events and celebrations.

“Our year-long celebration is highlighting EOP’s long and distinguished past, the work that the program does today, and inviting opportunities for reflection and discussion of educational access in the future,” said William Welburn, Ph.D., vice president for inclusive excellence at Marquette.