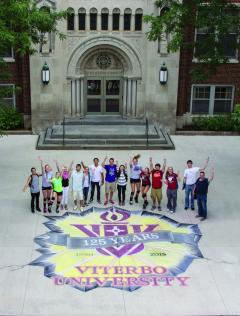 Founded by the Franciscan Sisters of Perpetual Adoration in 1890, Viterbo University is celebrating its 125th Anniversary with special events that commemorate the past and focus on its mission of service and leadership.

Students, employees, alumni/ae, and friends of the university are logging their volunteer service hours with the goal of 125,000 hours for the academic year. Two alumni provided unexpected momentum to the celebratory food drive and its goal of collecting 12,500 pounds of non-perishable food items. Derek Burnstad, vice president of Burnstad’s Markets, and Mark Skogen, president and CEO of Festival Foods, showed their appreciation for their alma mater by donating 12,500 pounds of food towards the goal. Viterbo then doubled the food drive goal to 25,000 pounds of food. The Viterbo community will share the bountiful food collections with the Viterbo University food pantry, Place of Grace Catholic Worker House, the La Crosse Warming Shelter, Centro Latino, and the Hunger Task Force.

The year-long anniversary celebration has included multiple demonstrations of Viterbo’s mission to prepare students for faithful service and ethical leadership. Carolyn Woo, president and CEO of Catholic Relief Services and named one of the 500 Most Powerful Women on the Planet by Forbes magazine, gave a campus presentation on “Common Good, Uncommon Excellence” for students, faculty and staff. Students gained the real world insights and lessons behind the recent film, “Captain Phillips” with a talk on leadership in challenging circumstances by Captain Richard Phillips, who was held hostage by Somali pirates.

In March, friends and supporters gathered for a gala arts event to raise scholarship funds and celebrate Viterbo’s commitment to the visual and performing arts.

The entire Viterbo campus community continues with observances of its 125-year history throughout the academic year.