Ripon's Department of Communication recognized as best in the U.S. 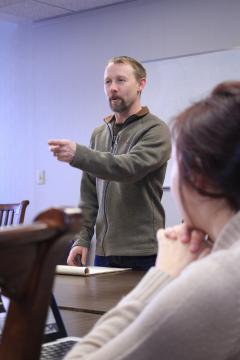 Steve Martin, associate professor and chair of the Department of Communications, leads a discussion.

The Ripon College Department of Communication received the prestigious 2014 Rex Mix Program of Excellence Award from the National Communication Association in November.

Each year, the award recognizes one undergraduate department of communication for overall excellence above all others in curriculum, program quality, course design, and special programs.

“We are deeply honored that our commitment to student development and empowering them as agents of change has been recognized at the national level,” says Steve Martin, associate professor and chair of the Department of Communication. “While the core of our program engages students in rigorous, traditional studies of rhetorical theory, American public address, and rhetorical criticism, we also invest time and resources to provide students with opportunities to apply what they learn in the classroom to the world beyond campus.”

The department established a national reputation in the early 2000s through the creation of its Speakers Bureau program, a selective traveling group that empowers students to serve as spokespeople for nonprofits whose missions align with their passions.

For eight years, the department’s extravagant “Mr. Ripon” comedic pageant has challenged Applied Communication students to use theory learned in other courses to wage a large-scale fund-raising and awareness campaign supporting  research by the Huntington’s Disease Society of America.

More than 90 percent of students who graduate from Ripon’s Department of Communication are employed within their career field of choice within six months of graduation; typically, more than half have secured full-time employment in their field of choice prior to Commencement.

Since 1996, 17 percent of communication graduates have attended a master’s or Ph.D. program in communication immediately following completion of the bachelor’s degree. Every graduate who has applied to graduate school has been accepted to at least one program offering a full-tuition scholarship and teaching assistantship stipend.